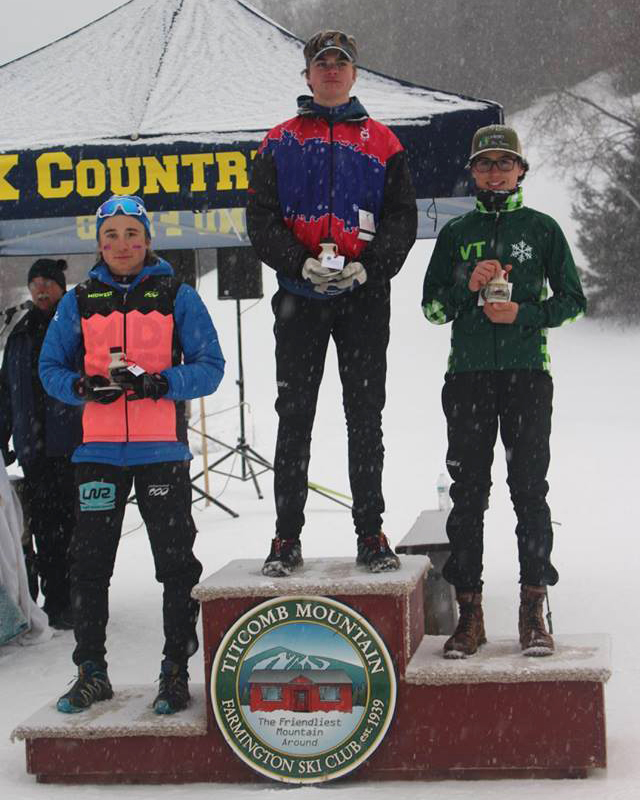 Cal Schrupp on the podium after Friday’s freestyle race

This annual end-of-the-season race is essentially an all-star event of top U16 skiers from MA, ME, NH, and VT, and this year there was even a team from the Midwest. On Friday, the skiers took part in seeded, wave-start 5km freestyle races. Saturday’s races were a 5km classic and a freestyle sprint, but due to the extreme cold and wind, the sprint races were cancelled and only the classic race was held. Sunday’s finale featured a 4x3km relay which determined the overall individual and team champions.

In Friday’s 5km freestyle, Cal found himself out front with Vermont skier Finn Sweet. Each skier pushed the pace and slowly distanced themselves from the rest of the wave. Coming into the finish, Cal took advantage of Finn’s draft and out kicked him in the final 50 meters for the victory. In the following day’s classic race, the temperature dropped to arctic levels and the wind gusted between 20 and 30 mph. The strong winds would quickly break up the field and Cal and Finn found themselves out in front again. This time however, Finn attacked on final hill, creating a small gap that he held to the finish—Cal still hung on and placed second. On Sunday, Cal skied a strong leg in the relay, placing 3rd and allowing team New Hampshire to take 2nd overall in the championships. Since Cal and Finn traded wins in the individual events, they ended up sharing the NENSA U16 title.

A complete listing of all race results are available from the link below:
www.barttiming.com/XCski/j2f2017/j2f2017.htm

And a recap of the weekend from NENSA:
www.nensa.net/2017/03/13/u16-championships-relay-day-and-weekend-recap/