After a year’s hiatus due to COVID-19, the Junior Nationals returned to the ski calendar. Top ranked junior skiers from Maine to Alaska convened at the Theodore Wirth Park in Minneapolis, Minnesota for a week’s worth of racing. National titles, All-American honors, and the prestigious Alaska Cup were all at stake. 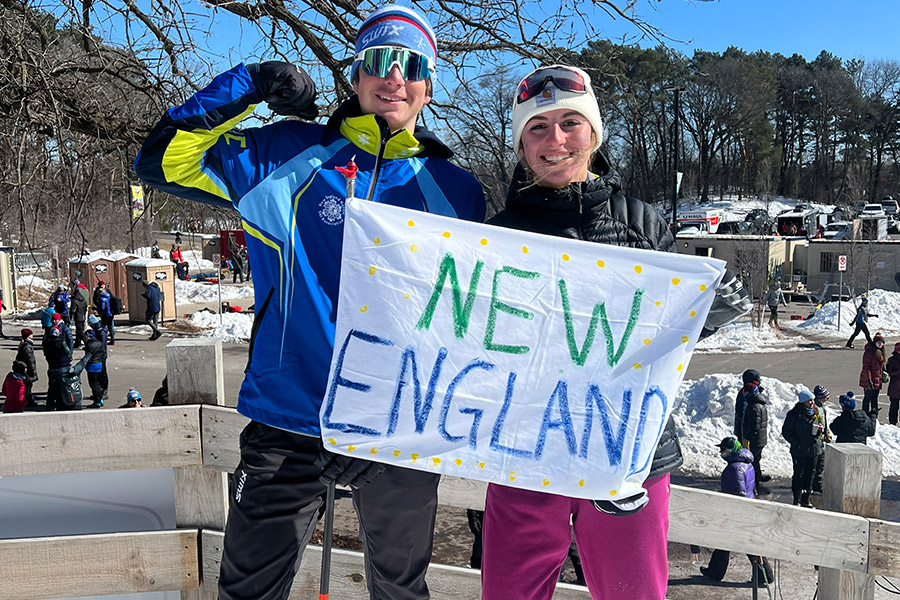 Racing kicked off on Monday with the 5k individual start freestyle races. In typical upper midwest fashion, conditions were sunny but windy and cold. In the U20 women’s race, Stow took third out of 38 racers in her age bracket. In the U16 boy’s races, Watt also produced a top time and finished 15th out of the 76 skiers in his category.

Wednesday’s classic sprints began with a qualifier on the 1.3k sprint course, where the top-30 finishers moved on to compete in heats of six. Stow finished 7th in her qualifier while Watt finished 13th. In the quarter-final heats, Stow won her race and advanced to the semis, while Watt finished 6th and did not qualify for the next round. In the semis, Stow hung on for a tight 4th-place finish in her heat. Since her heat was the fastest of the 2 semis, Stow moved on to the finals. In the finals, Stow just missed the podium and finished in fourth position. 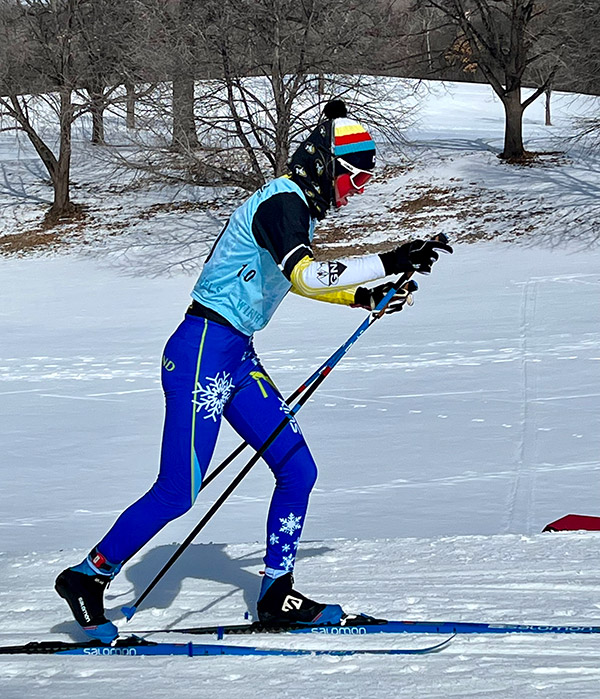 The U20s had a similar pack dynamic but was quickly strung out by an early breakaway by New England skier Nina Seemann, who had won the 2 previous races at the competition. On the next lap, Stow moved herself up into the chase group of four chasers. By the top of the lap’s major climb, this group found themselves with a small gap over a strung-out field. On the penultimate lap, Seemann’s lead grew over the chasers and Stow smartly stayed in the slipstream of her group. On the final climb, Stow made her move and attacked the group. She quickly distanced herself from the group and gritted her way to an exciting second place finish—18 seconds behind Seemann and 10 seconds ahead of the third-placed skier. 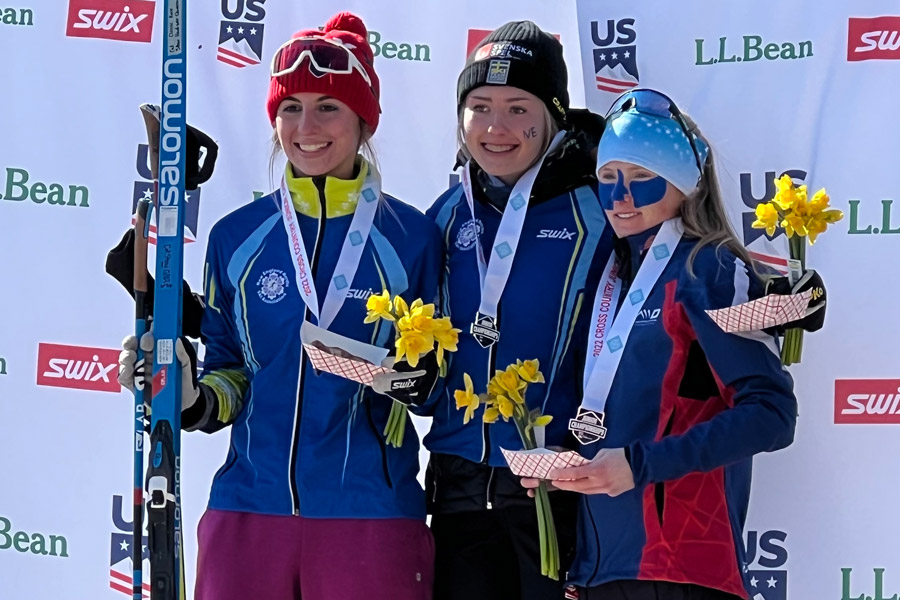 Saturday featured the most anticipated race of the week, the Mixed 4 x 3.3k Team Freestyle Relay, with boys racing legs one and two and girls racing the third and fourth legs. Every skier participating at Junior Nationals got a chance to race on a regional-specific team, with each region fielding multiple teams.

Watt qualified for New England’s Team 2 and skied the second leg, producing the sixth fastest leg of the race and helping his team place 7th among all 36 teams entered in the U16s. 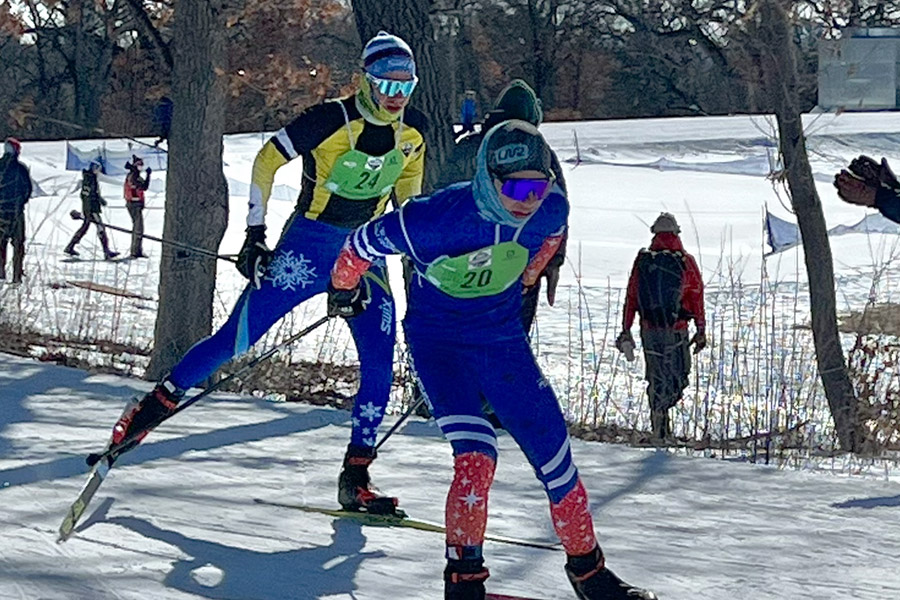 Tyler Watt during his relay leg

The final relay of the day was the U20 race. With team New England already taking the top spots in the U16s and U18s, the pressure was on the U20 team to take the win and sweep the relays. Stow raced the third leg for team New England, going in with a 5.8-second deficit to team Alaska. She skied strong and caught her Alaska competitor on the same hill where she made her attack in the 10k mass start earlier in the week. In similar fashion, she powered over the climb with a gap and brought team New England into first place for the final exchange. The final exchange was to Nina Seemann, winner of all of the 3 individual U20 races, allowing Seemann to cruise in for another New England relay victory. Of special note, Stow skied the fastest female leg of the race!

Congratulations to Cat Stow and Tyler Watt for their amazing season and accomplishments. Hats off to the Loppet Foundation for hosting a beautiful championship. And finally, a big thank you to NENSA for all they do for the New England skiing community—from the training camps, pre-season rollerski races, the big Eastern Cup Events, and all the amazing support that they provided to the New England athletes during the championships.

All-American honors go to skiers who achieve top-10 finishes at any of the individual races at the Junior Nationals.

About the Alaska Cup
The Alaska Cup is a competition within the National Championships in which points are awarded to each geographic region based on race results. The Alaska Cup is awarded to the team that acquires the most points across all 4 days of racing, earning them the honor of being the top regional team in the country. Throughout the week, New England skiers produced solid results in each race allowing them to secure the prestigious Alaska Cup from 2020 winner Team Alaska.